2013 INTERNATIONAL CHAMPION Man on a Mission of Clear Passion/ “Amos”

Amos is a dream English Cream Golden Retriever imported in from Romania. He is almost PERFECT in every way.

At an International dog show recently he was doted on by every breeder and professional handler around. Every customer after coming to visit Amos has been even more impressed by him.

Amos has his final BVA hip and elbow score (BVA 3:5) This is equivanent to an OFA “Excellent/Good” hip rating (average Golden has a score of 9:9!). His elbows were rated 0:0 by the BVA which is the best score possible.

He also has been checked by Carolina Tech’s Regional College of Veterinarian Medicine by an ophthalmologist and a veterinarian and has been cleared with OFA for his heart and the CERF (Canine Eye Registration Foundation) with his eyes (GR-EYE324/9M-VPI).

Amos has been DNA Profiled by the AKC and is dual registered with ACHR (Romania Kennel Club) and the AKC.

Registered Name:
“Man on a Mission of Clear Passion”

He has the most impressive pedigree of any Golden Retriever that we have seen in the world today. His father and mother are both Romanian and Serbian Champions and his grandfather is the famous Moondust Masterpiece from the Netherlands (World Champion in 2006). 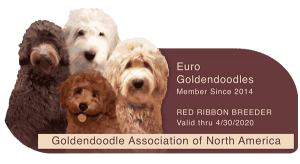